Summertime doesn’t necessarily equate to skiing having to end in Colorado, and for the past few years I have been seeking turns all year long.  When the snow starts to melt and the temperatures start to rise, the potential for getting skunked goes up, the places to go get a little trickier to figure out, and the adventure often increases.  Earlier last week was one of my most enjoyable summer skis of the past few years.

In scouring guidebooks and soliciting beta from fellow skiers and mountaineers, one line I kept coming back to in my mind was Snow Lion on Mount Jasper.  Though I hadn’t been able to lay eyes on it myself this season, it sounded like a reliable choice to still be holding snow this late with how much loading it sees during the winter.  My girlfriend, Claire, also had recently returned from a backpacking trip from a zone just a few drainages south with pictures of snow-filled lines.  It seemed worth the hike to go check it out.

Claire and I spent the night before sleeping in our car at the trailhead.  We met our friend and fellow Bentgate employee, Thomas, at the trailhead at 5:30 that morning.  Despite having every intention of being on the trail at 5:30 and everyone being punctual that morning, time slowly began to slip away from us.  None of us could resist the siren song of the immaculately-kept pit toilet at the trailhead.  The thought of another long day of potentially carrying used wag bags sent us one-by-one through the dim morning light into the small sanctuary provided by the forest service.  We then finally began our march along the trail, energized by the growing morning light and by our increased digestional comfort. 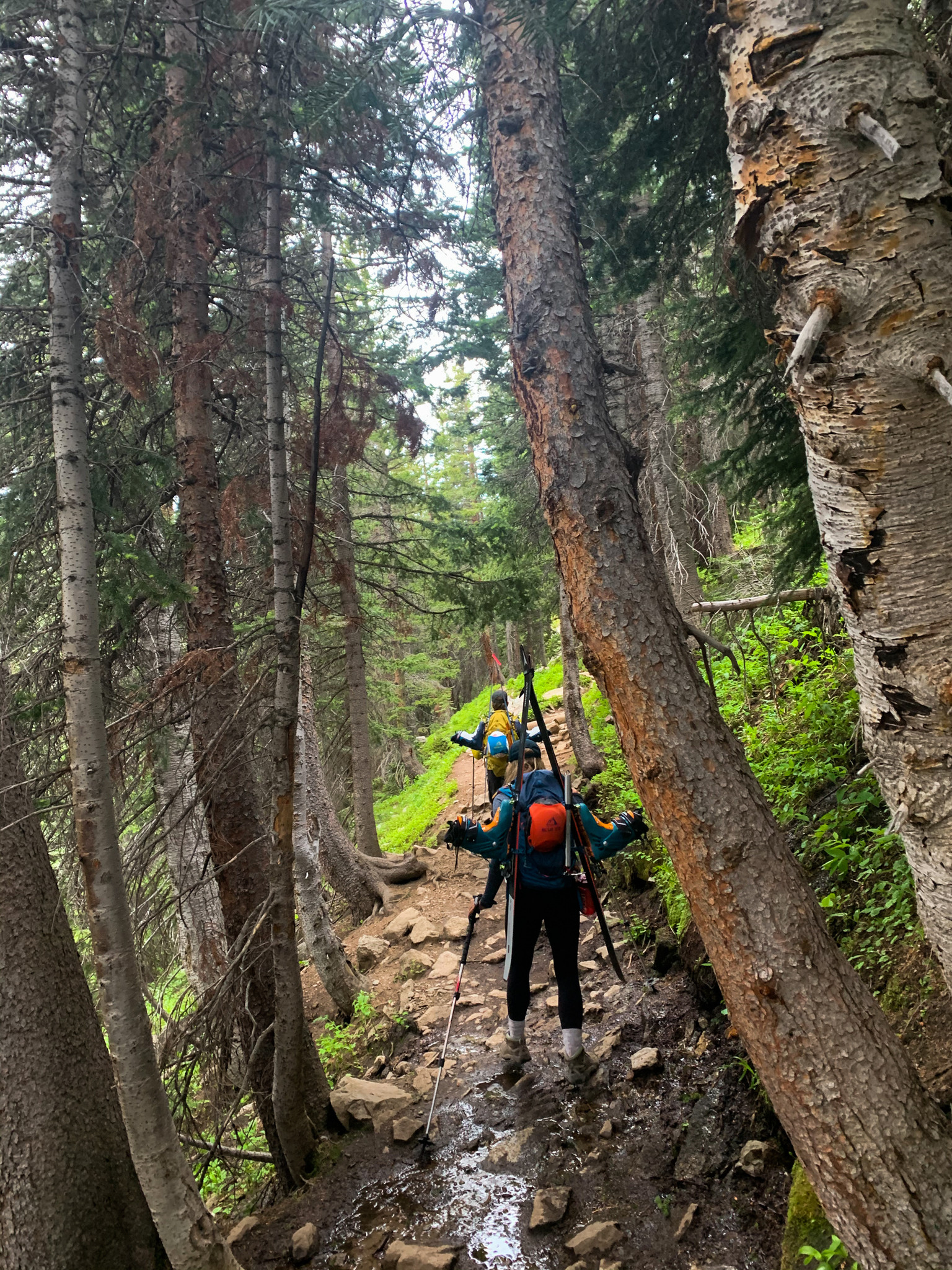 The trail begins its ascent through the forest complete with boardwalks, wildflowers, and even a waterfall crossing.  After perhaps a mile or mile and a half, we start to get views peeking out of the trees, and get our first look at Jasper.  Snow Lion still remains shrouded from our sight by the eastern flank of the mountain, but the northeast face lets us know beyond any shadow of a doubt that our hike will not be in vain:  there is lots of snow still on Jasper. 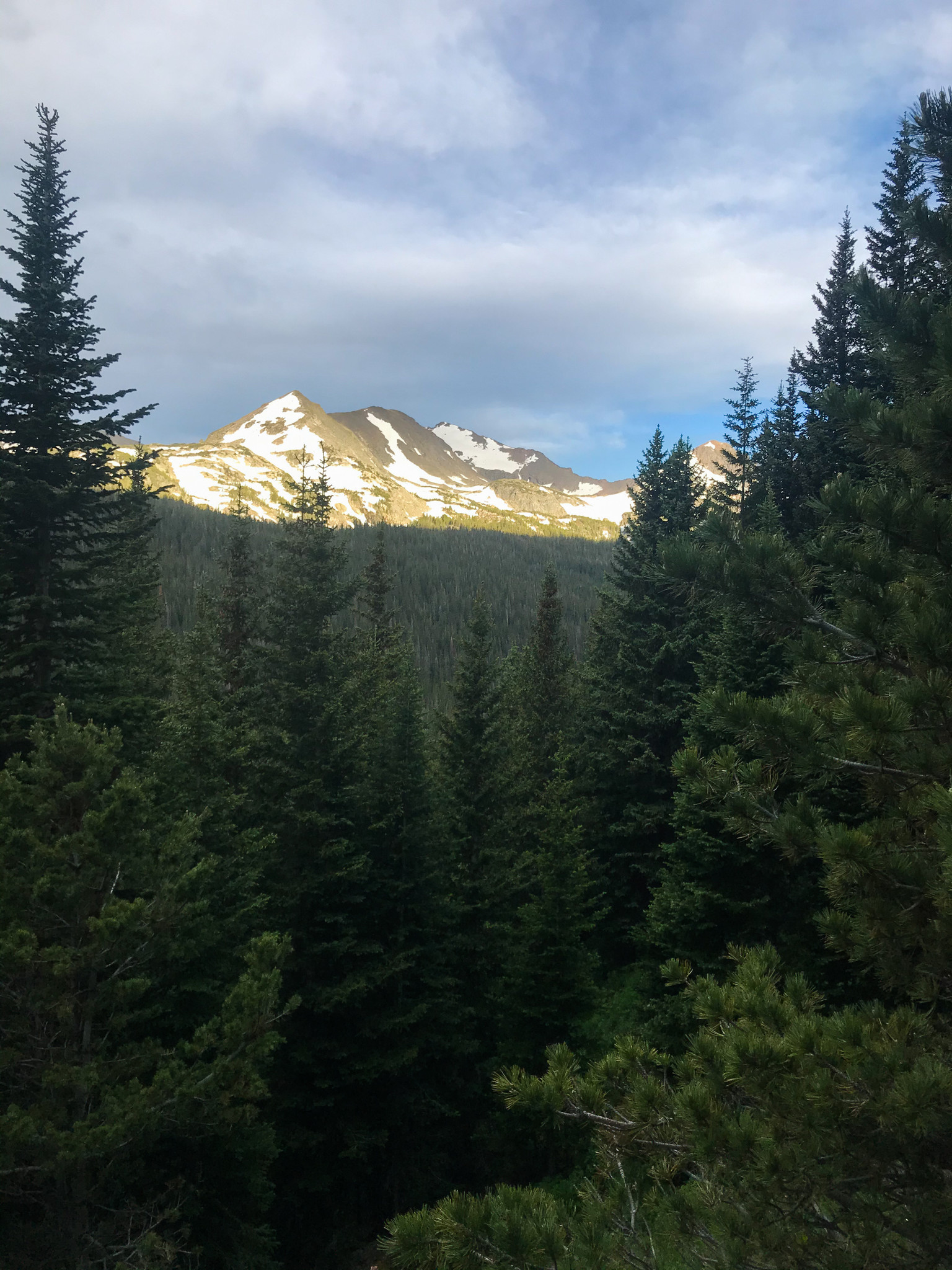 Jasper in the distance. Photo @AustinPiper

We change trails at a junction so that we can skirt around the massive eastern flank and come up through the valley that has Snow Lion at its apex.  We immediately began to lose elevation, which brought with it the requisite disappointment of knowing that we would have to hike uphill for a while on the way out.  As the trail serpentined its way down through the forest to the North Fork of Middle Boulder Creek, it petered out and branched off into multiple trails going in different directions.  We started trying to rock hop our way across the water to find the trail on the other side, but quickly reversed course and decided it would behoove us to find a bridge to cross the raging North Fork.  Too many of us had suffered through unfortunate outcomes in creek crossings in the past year to be cavalier with this one.  We found the bridge and began gaining elevation yet again. 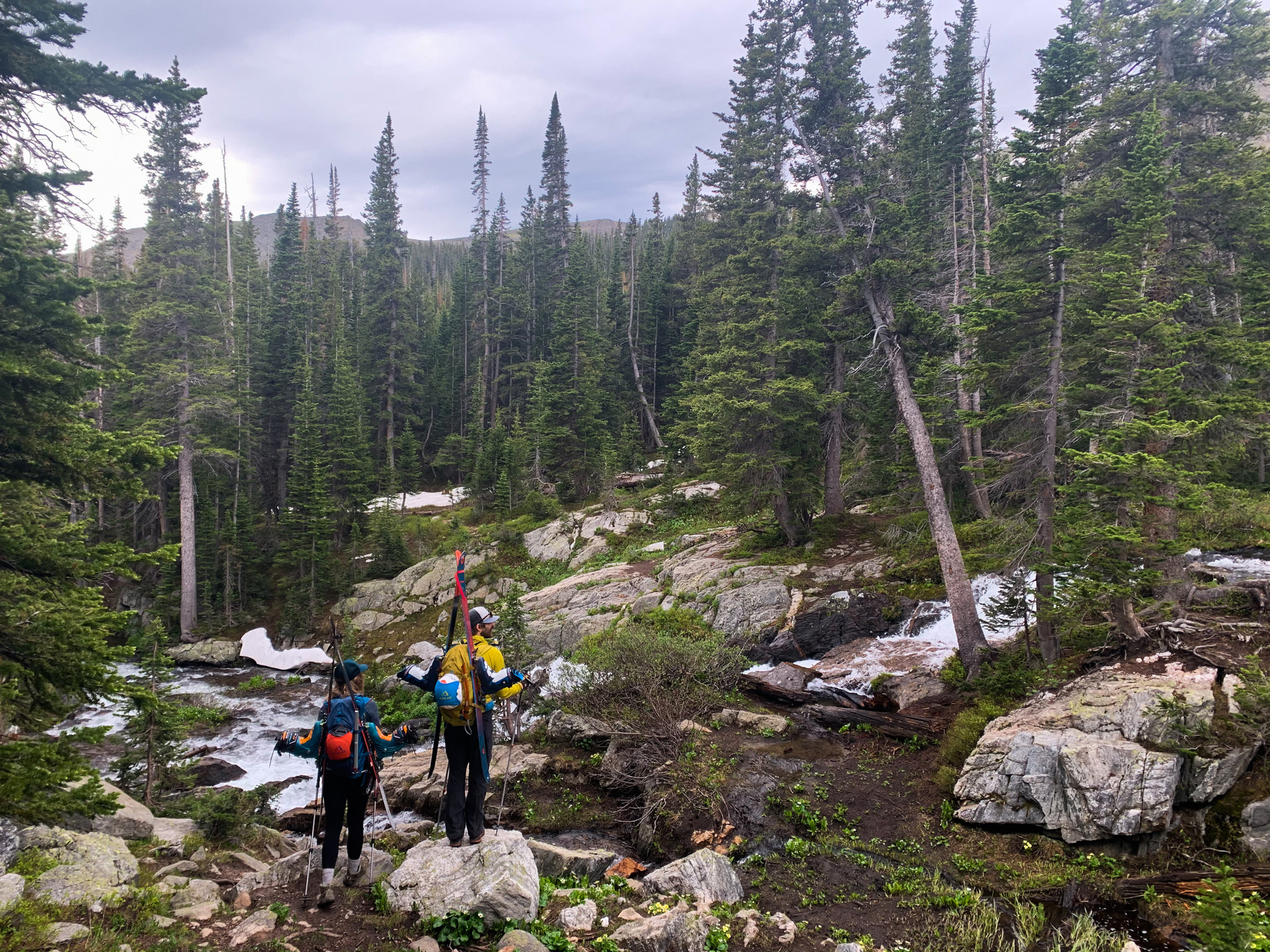 As we started climbing back towards treeline, we couldn’t help but to notice the sky was a good bit darker than we would have liked, especially for that early in the morning.  The winds also seemed to be picking up as we got higher.  We all knew that the forecast was calling for a chance of rain around noon; now were our first verbal acknowledgements to each other that the weather seemed to be coming in earlier than we anticipated.

We made it to Diamond Lake.  Struck by its beauty, we took our time contouring around the shore of the lake, trying to take in the views in all directions as we passed by.  Diamond Lake also marked where we began having to cross snow.  I was optimistically hoping that we wouldn’t have much snow until we got to the base of our line, but Claire was adamant from her backpacking trip to that nearby zone that we would encounter snow earlier than that.  Like usual, she was right.  As we reached the eastern end of the lake, the trail petered out yet again and we struggled to see where it might be going.  With looking up the valley and seeing that we would be on and off basketball-court-sized patches of snow for likely the rest of the way, we decided to just start kicking steps in our hiking boots on the patch directly in front of us and try to take the path of least resistance up the valley. 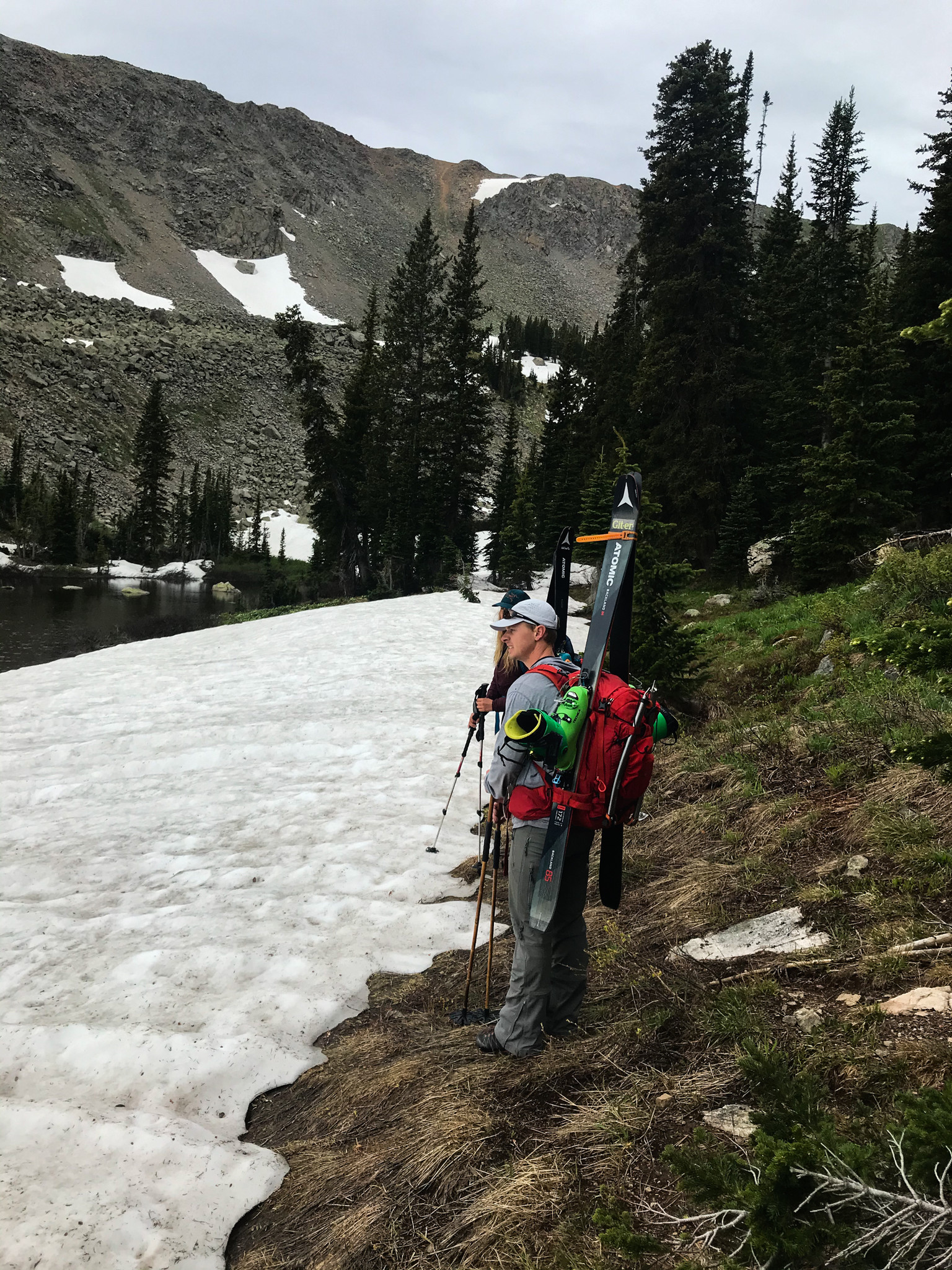 The path of least resistance turned out to be much slower going than we anticipated.  We were gaining ground, but at almost a snail’s pace compared to our time on the trail up to the lake.  During all of this alpine bushwacking, the skies and winds were doing nothing to quell our uneasiness about the slower-than-anticipated pace.  As we got higher, we finally caught our first glimpse of the top of Snow Lion.  What would have typically been a moment of excitement turned out to be a moment of dreariness.  Though the GPS app said it was only a little over a mile away, Jasper looked and felt a lot farther in that moment.  The thought of another mile of this sort of terrain to get there (not to mention getting out) was less than appealing.  And with thinking about how long it might take us to get up there at this current rate, and looking up at the seemingly bleak weather outlook, it wasn’t even a debate - none of the three of us thought it would be a good idea to go all the way out to Snow Lion at this point. 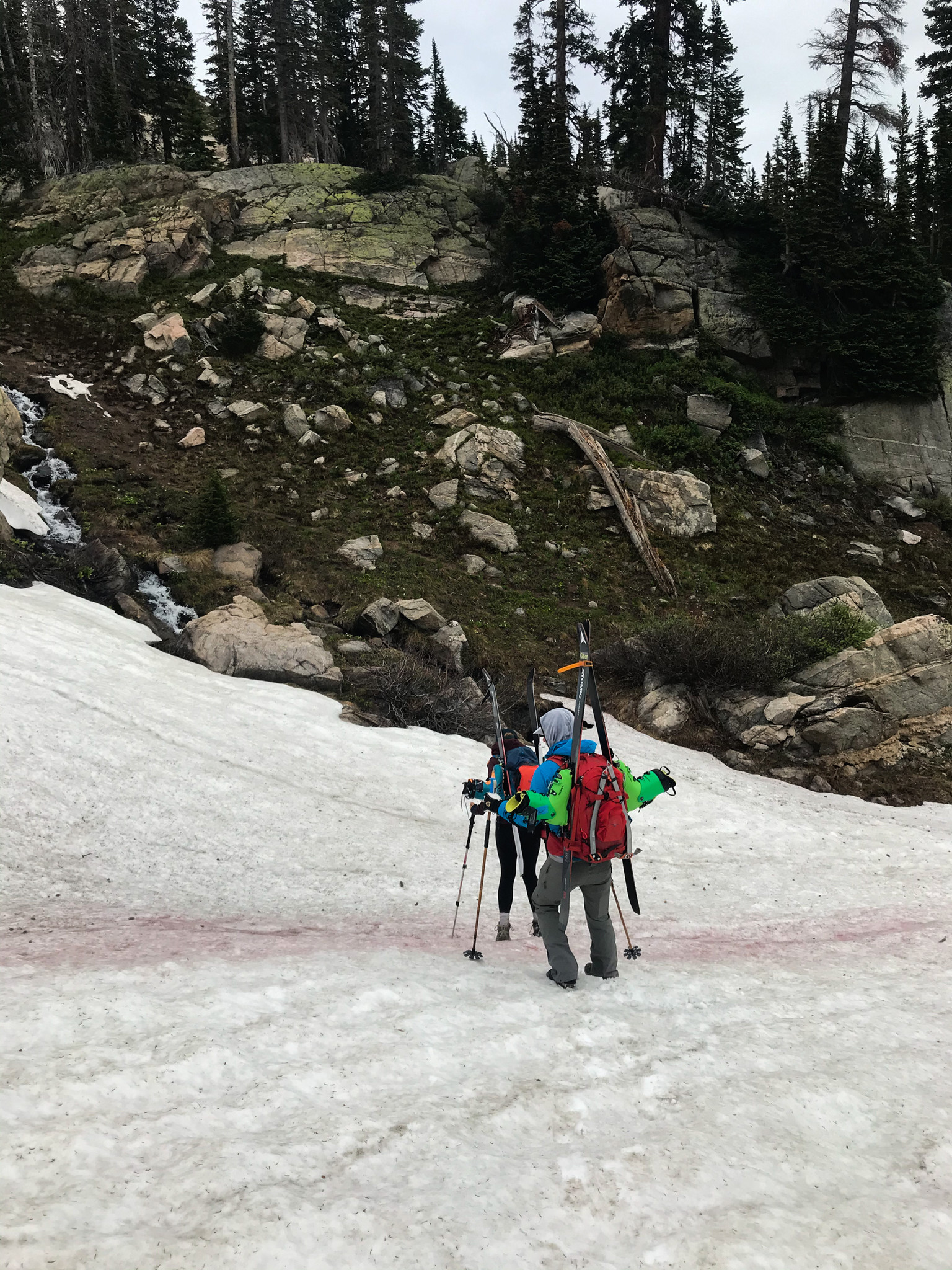 The disappointment of deciding to bail on Snow Lion was tempered by the excitement of the consolation prize we saw sitting in front of us.  There was plenty of snow on the ridge that was, compared to the summit of Jasper, quite close.  We made our way up to the base of the snow, traded the hiking boots for ski boots, and ditched unnecessary water bottles and layers from our packs.  As we donned our crampons and axes, we began climbing up to the top of the ridge. 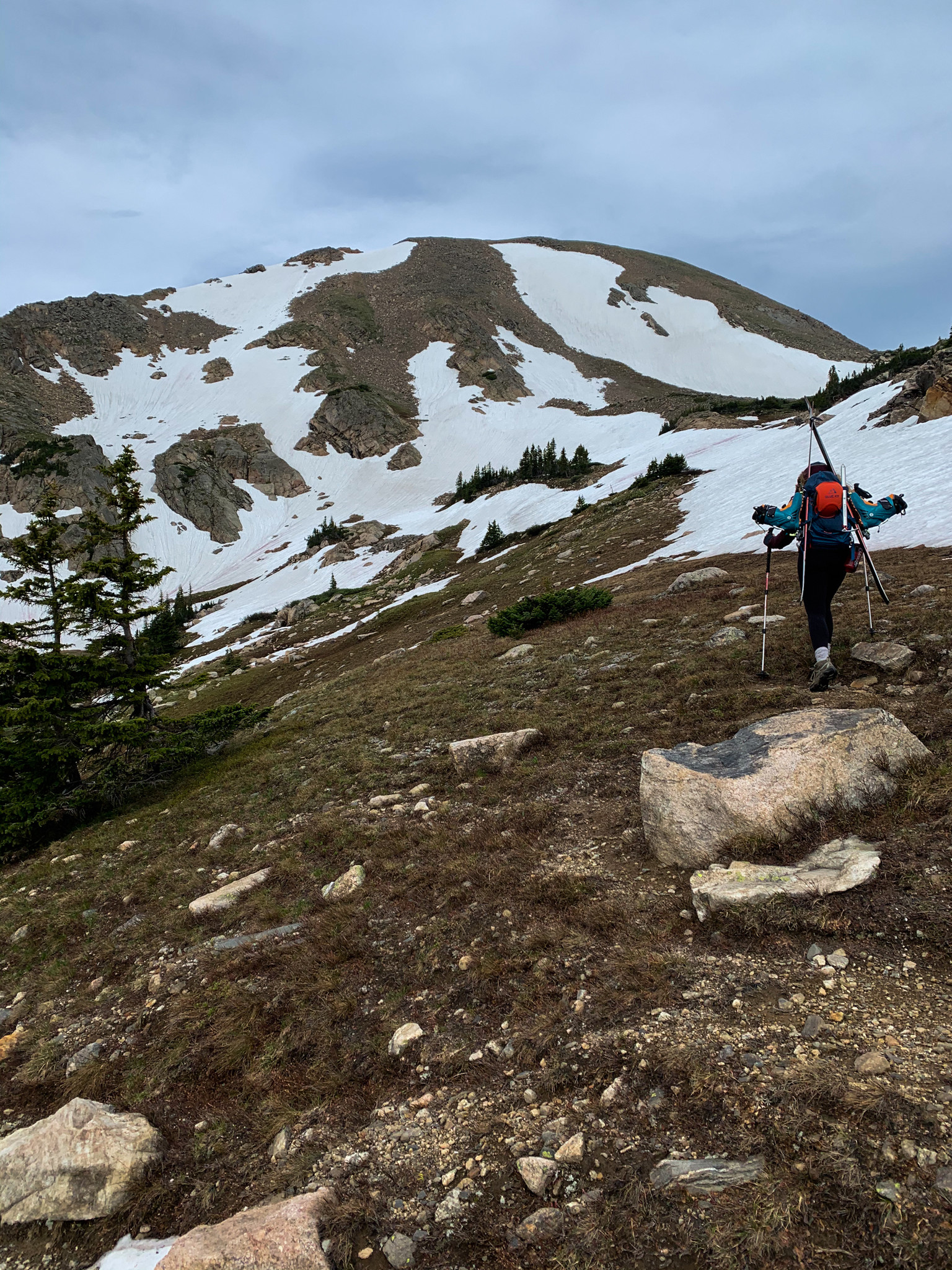 Cruising up the ridge. Photo @AustinPiper

The climbing was straightforward and mellow, but now that we were actually rubbing noses with the snow, we saw how runneled it actually was.  It had all the looks of making for a potentially unpleasant ski down, but we pressed on.  After what my watch said was a little over 700 feet of climbing, we got to the top of the ridge.  With stunning views in all directions of the Indian Peaks, we all were far from disappointed with our decision.  At this point, the clouds had broken and the winds subsided to a degree, and we no longer felt the sense of urgency with the weather.  With this newfound comfort, we decided to explore along the ridge and see if we could sneak a peek at Snow Lion. 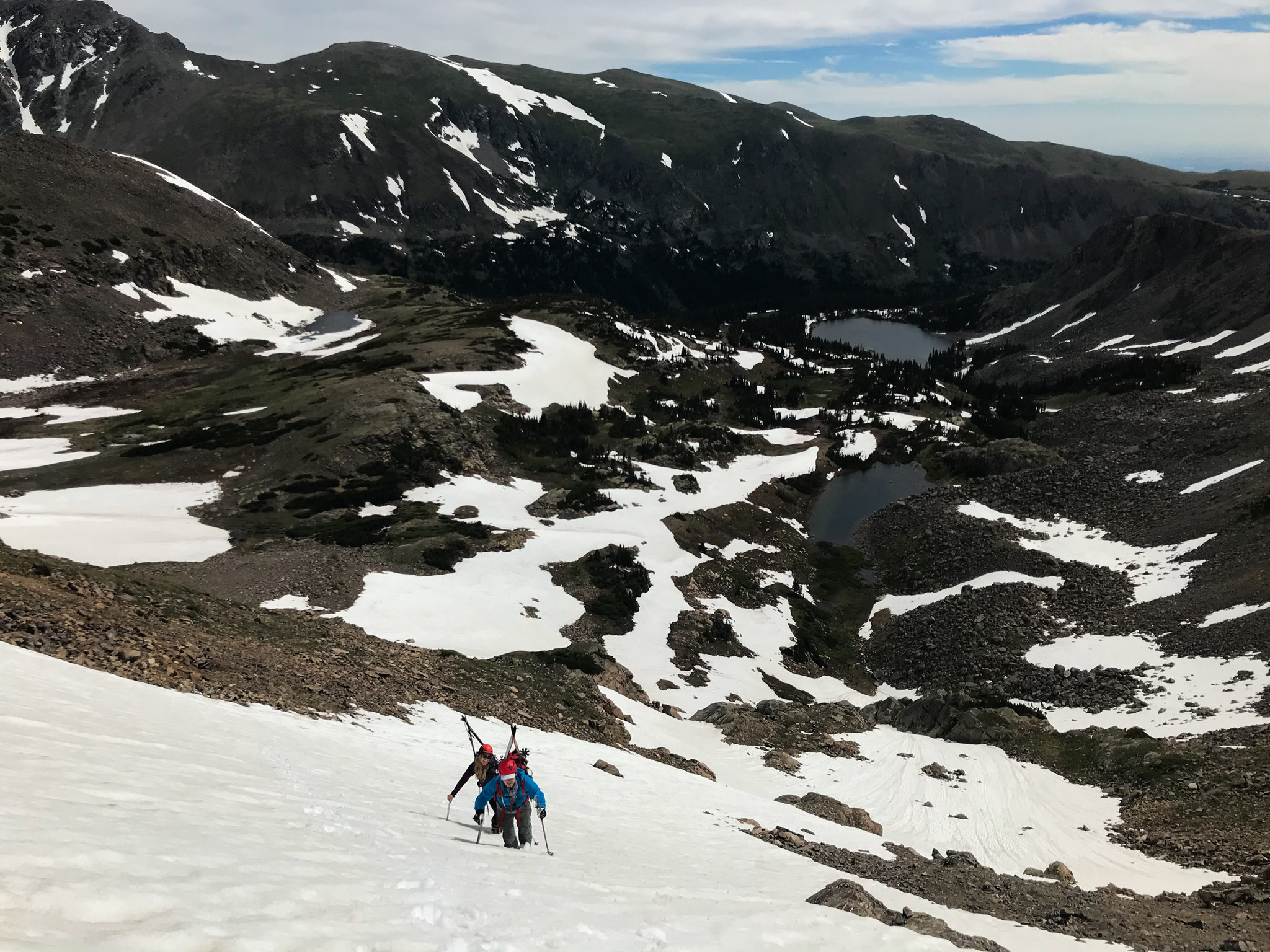 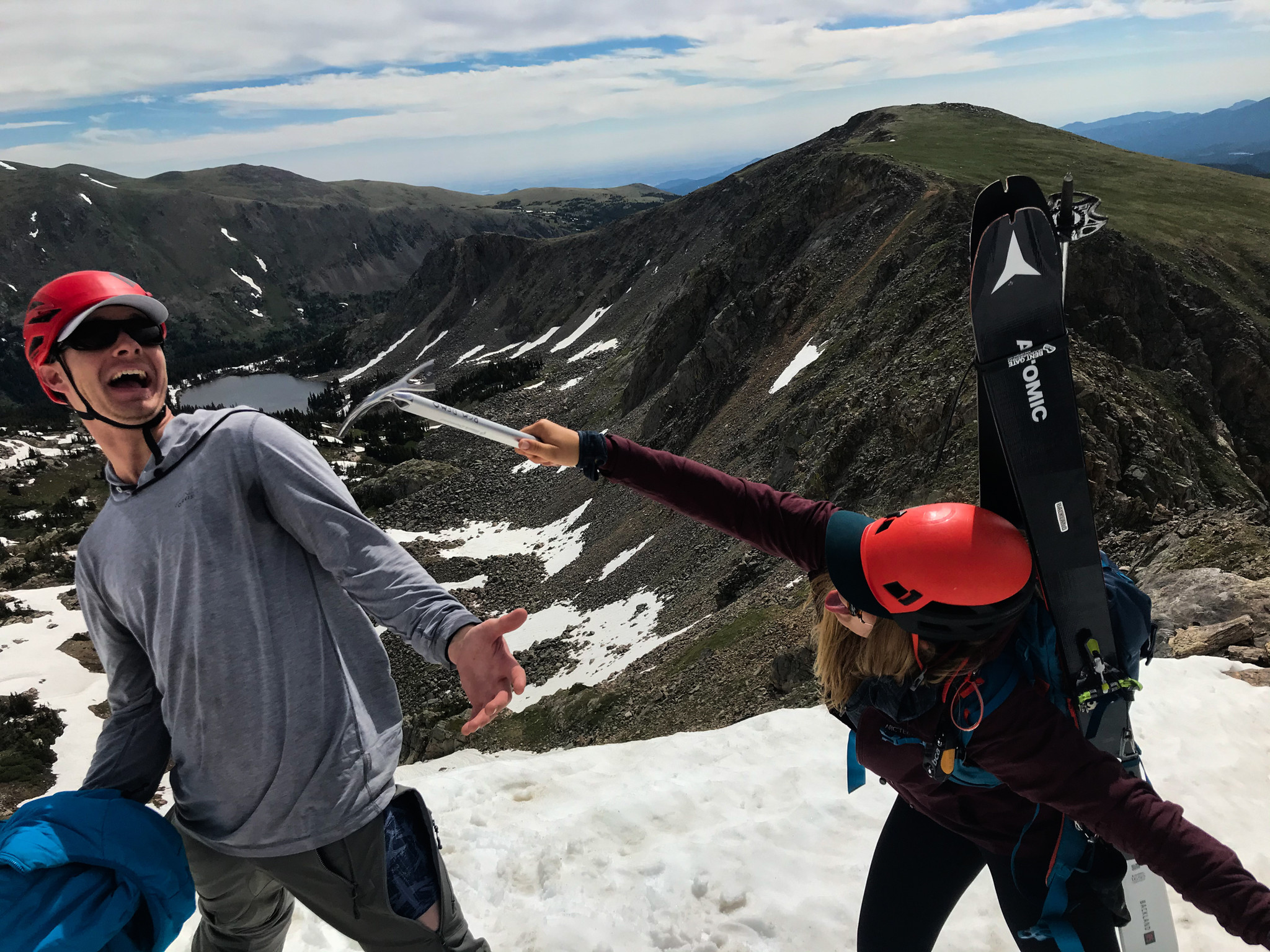 Proper use of a mountaineering axe. Photo @AustinPiper

Exploring along the ridge ended up being one of our favorite parts of the day.  It can be hard to beat walking along a ridge in the Colorado alpine in the summer.  After passing a few spots where we were sure we would be able to see Snow Lion, we finally reached a point on the ridge where we could see it. 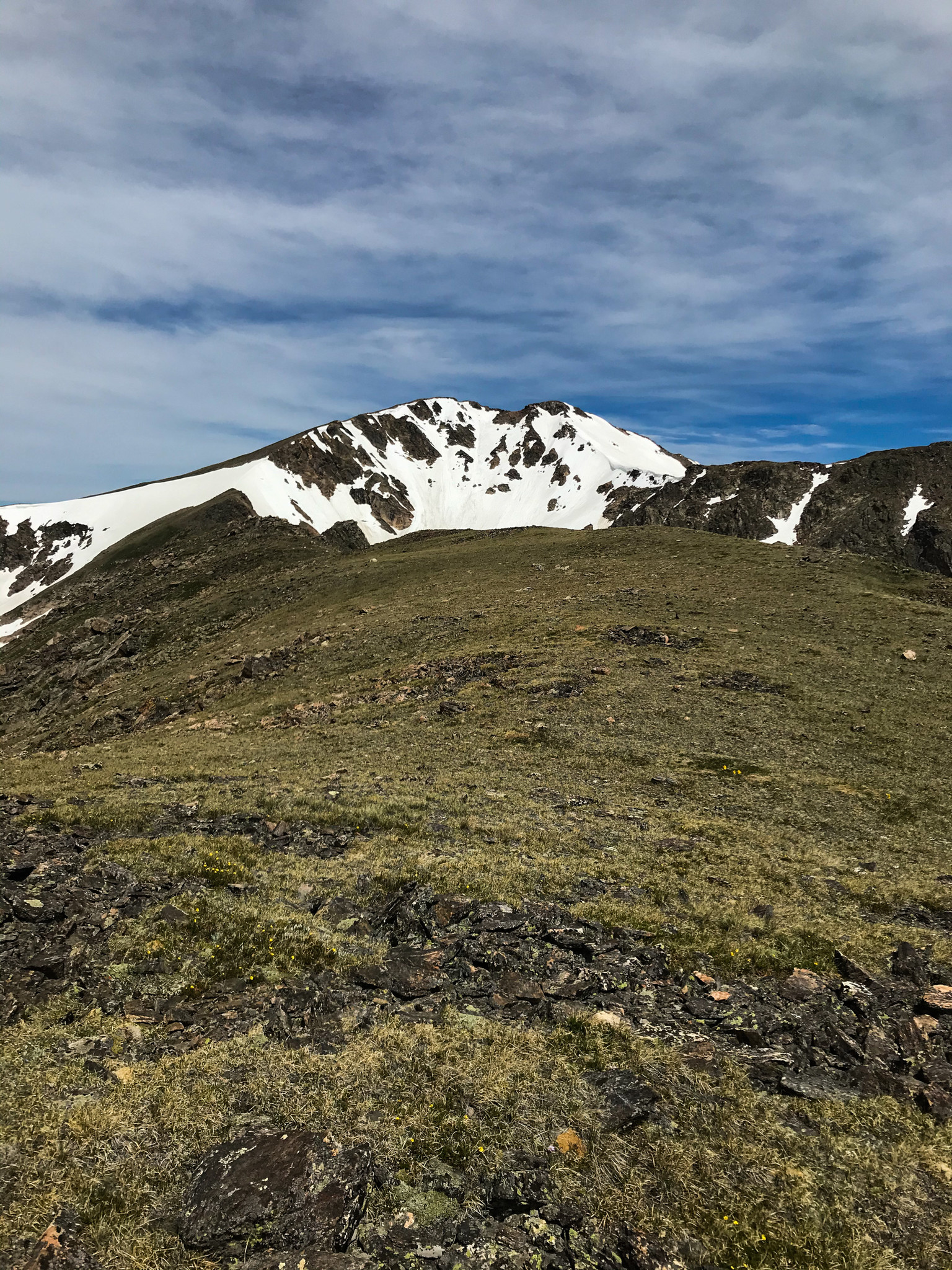 Snow Lion was still chock full of snow and looked quite enticing.  We knew it would have to wait for another day for us at this point, but we couldn’t help but look at the rest of the approach we hadn’t done and play the “what if” game.  Perhaps we could have made it the rest of the way out and climbed and skied Snow Lion that day, but none of us regretted our decision.  I never regret playing it safe in the mountains. 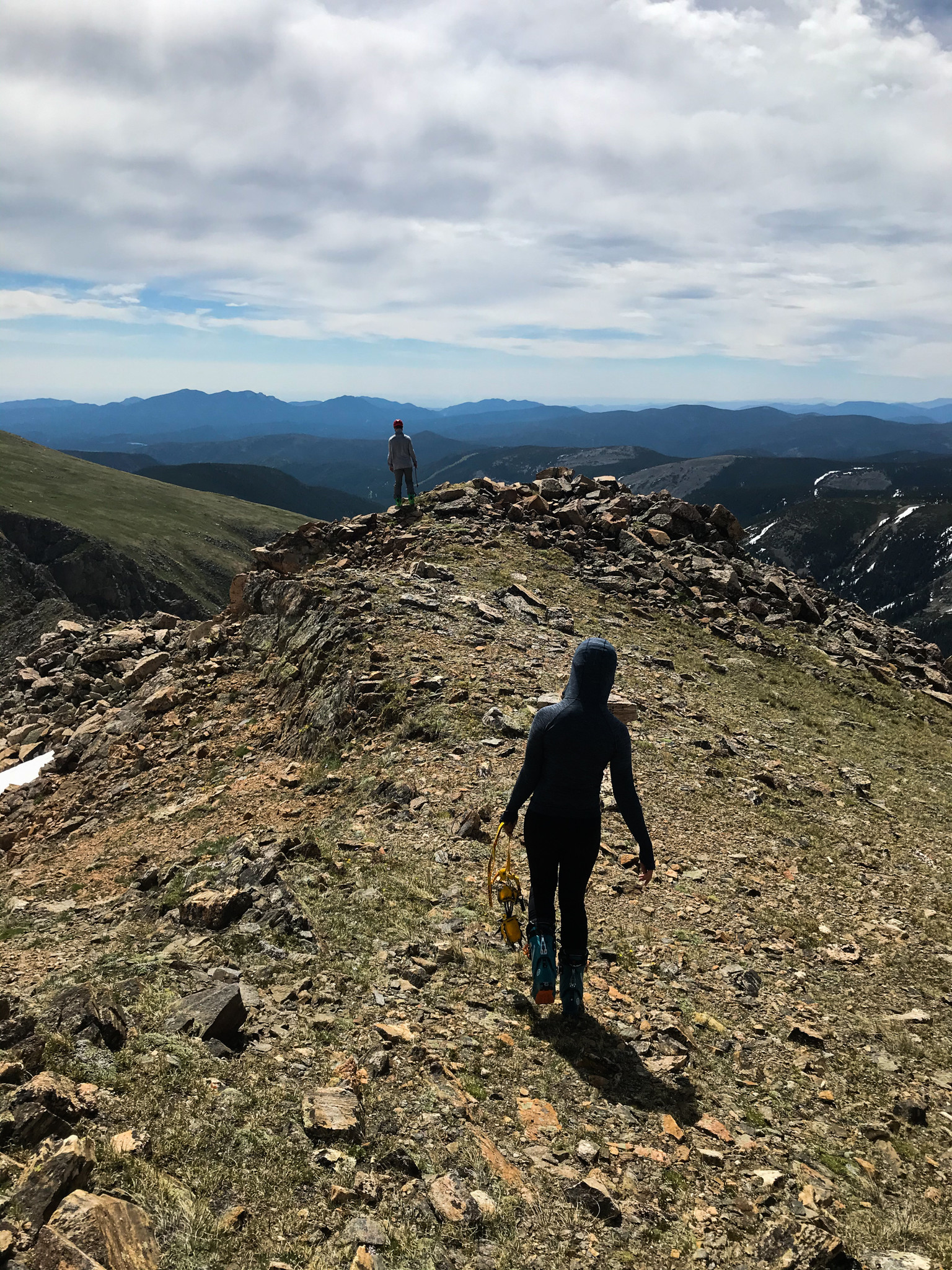 Content with the incredible views of Jasper and the Indian Peaks, we made our way back down the ridge and transitioned to our skis.  Thomas dropped in first, and, much to our pleasure, quickly found out that the runnels had softened up to the point that they were a non-issue for the vast majority of the skiing.  We regrouped twice on the way down, taking turns who would be the guinea pig to ski a given section first and see how bad (or most of the time, how not-bad) the runnels were.  We skied back down the last stretch to our stash of extra gear and took the skis off.  Not a hundred percent over the skiing, we repacked our bags and hiked up just a little more to let one of the longer snow patches carry us a little further down in elevation before the skis go back on the pack for good.  When you find corn that good at the end of June, you don’t pass by it on foot instead of skis. 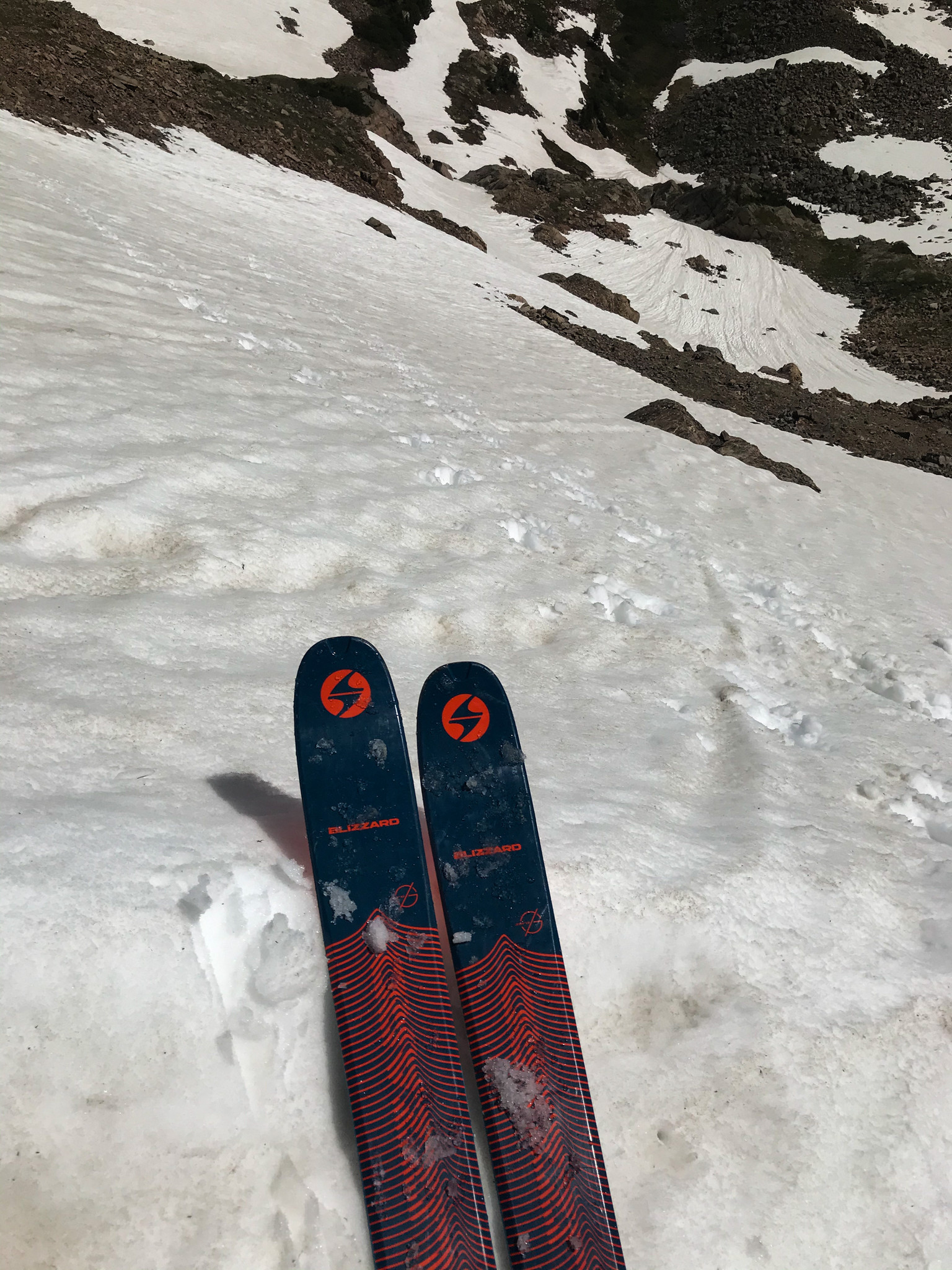 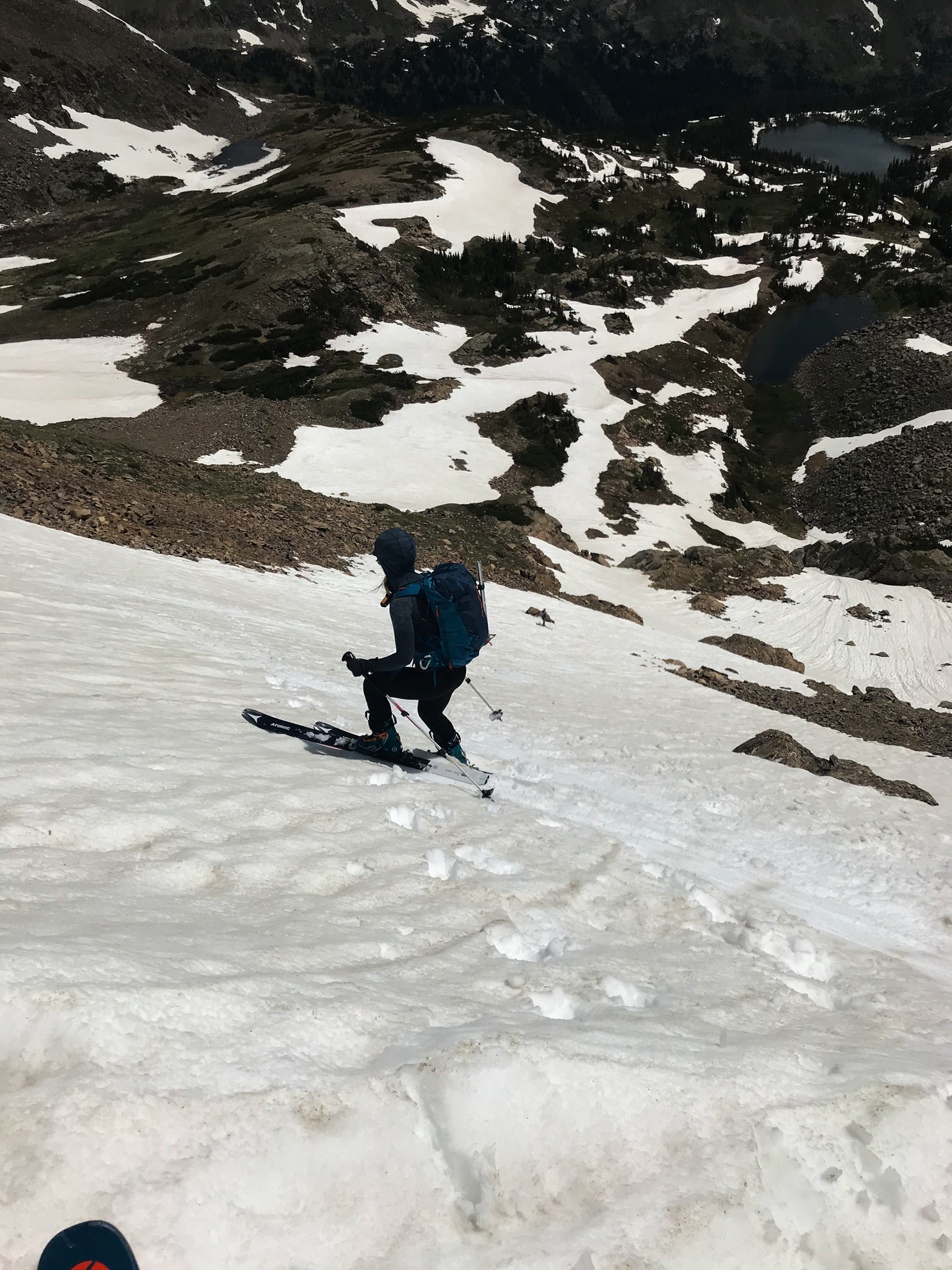 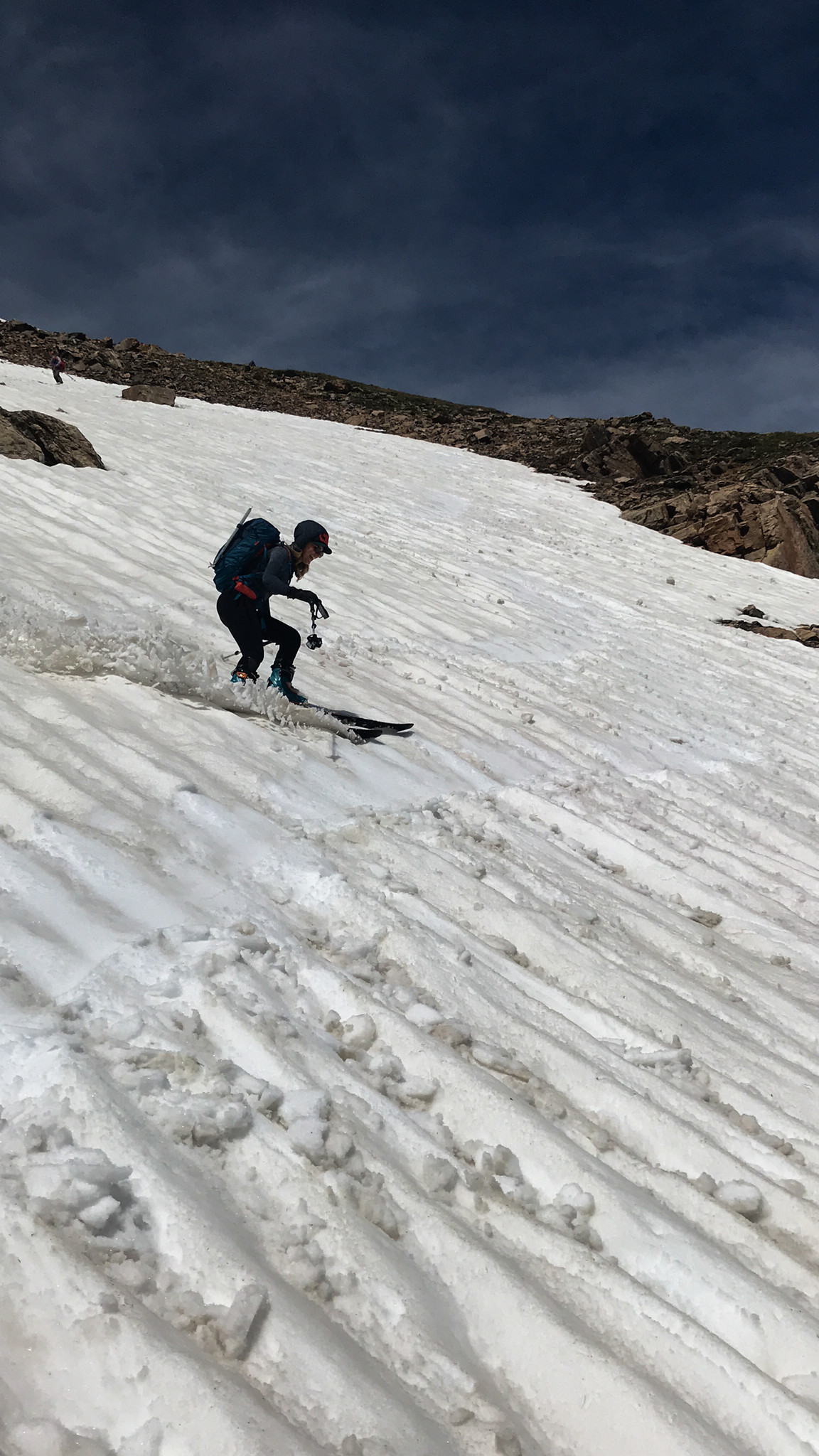 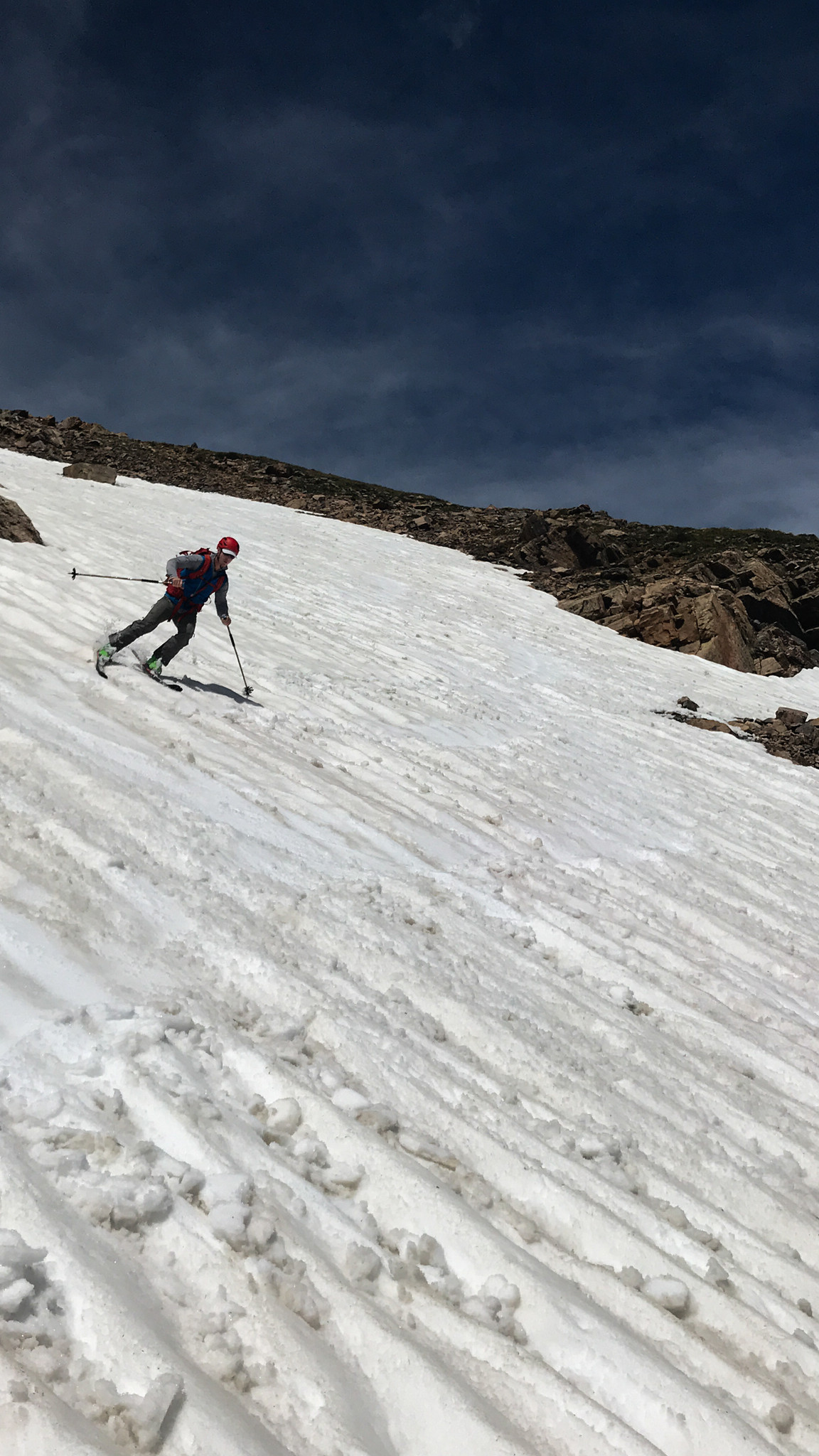 Thomas getting in on the action. Photo @AustinPiper

We savored our last turns for another two or three hundred vertical feet down the patch.  We explored around at the bottom to see if it was worth trying to ski anything else down.  We accepted our sad reality that it was time to transition back to hiking boots.  We began the trudge back down to Diamond Lake, through the same terrain that gave us so much trouble on the way up.  The top-down view made it much easier to pick out the sections of the trail that weren’t covered by snow and the trip back down to the lake went exponentially quicker than the way up did (if only we could have known the path on the way up!).  Snow, dirt, snow, posthole, dirt, snow, posthole, mud, snow, dirt.  I was thankful that Claire convinced me to wear hiking boots instead of trail runners and that I had relatively dry feet, all things considered, as we made it back to the lake. 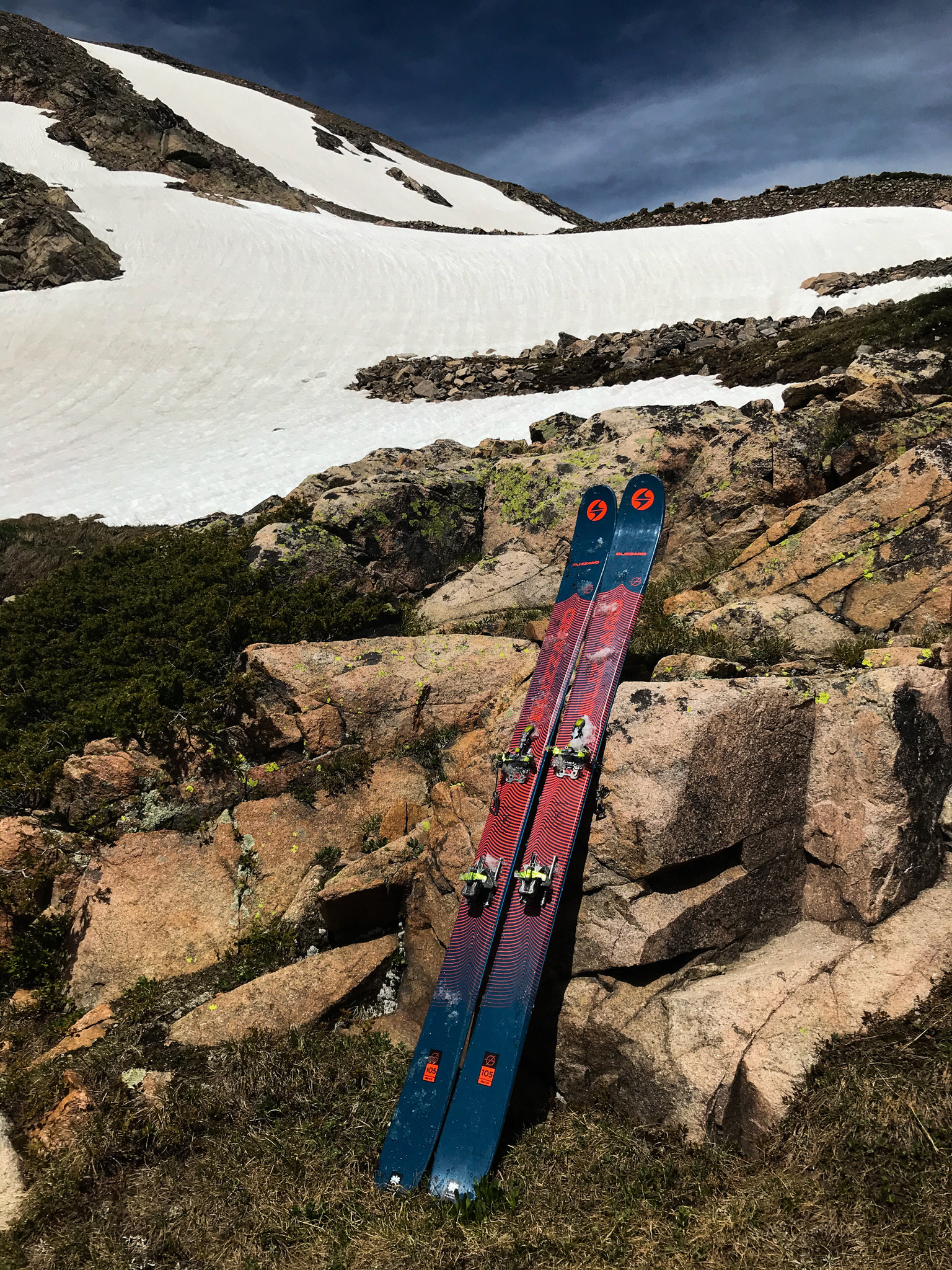 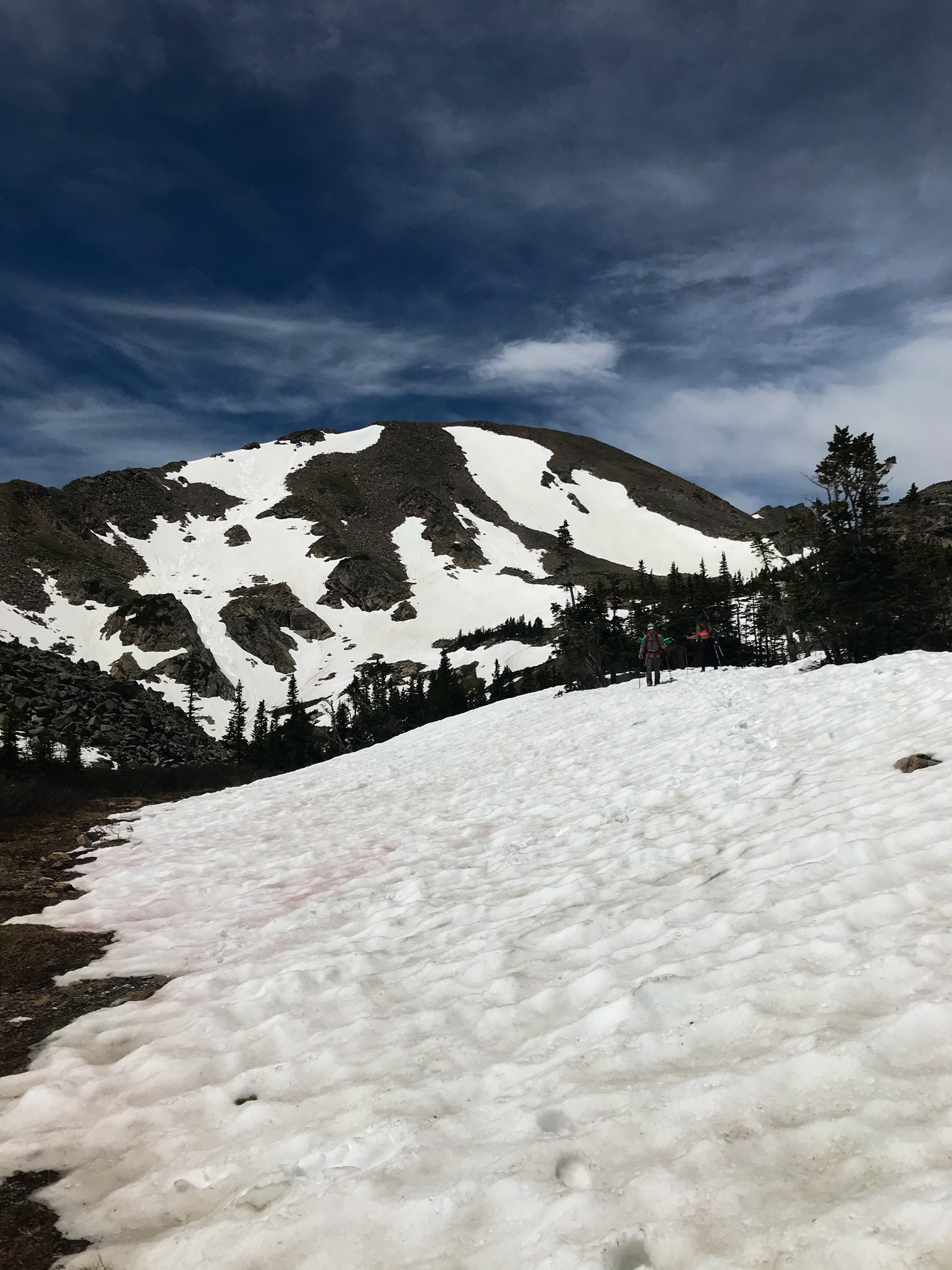 The return to the lake brought with it seeing other people (seemingly all hikers) and the quizzical looks one gets when they have skis strapped to their pack in the summer.  We took a few minutes to eat a snack and trade the softshells for shorts, and then began the march back to the trailhead, inspired and fueled mostly by thoughts of pizza in Nederland on the way home.  Stopping only for the questions of confused hikers about why we had skis with us, we made much better time on the way out than the way in.  Perhaps it had something to do with knowing just where we were going and mostly going downhill, or perhaps we were just more motivated by pizza. 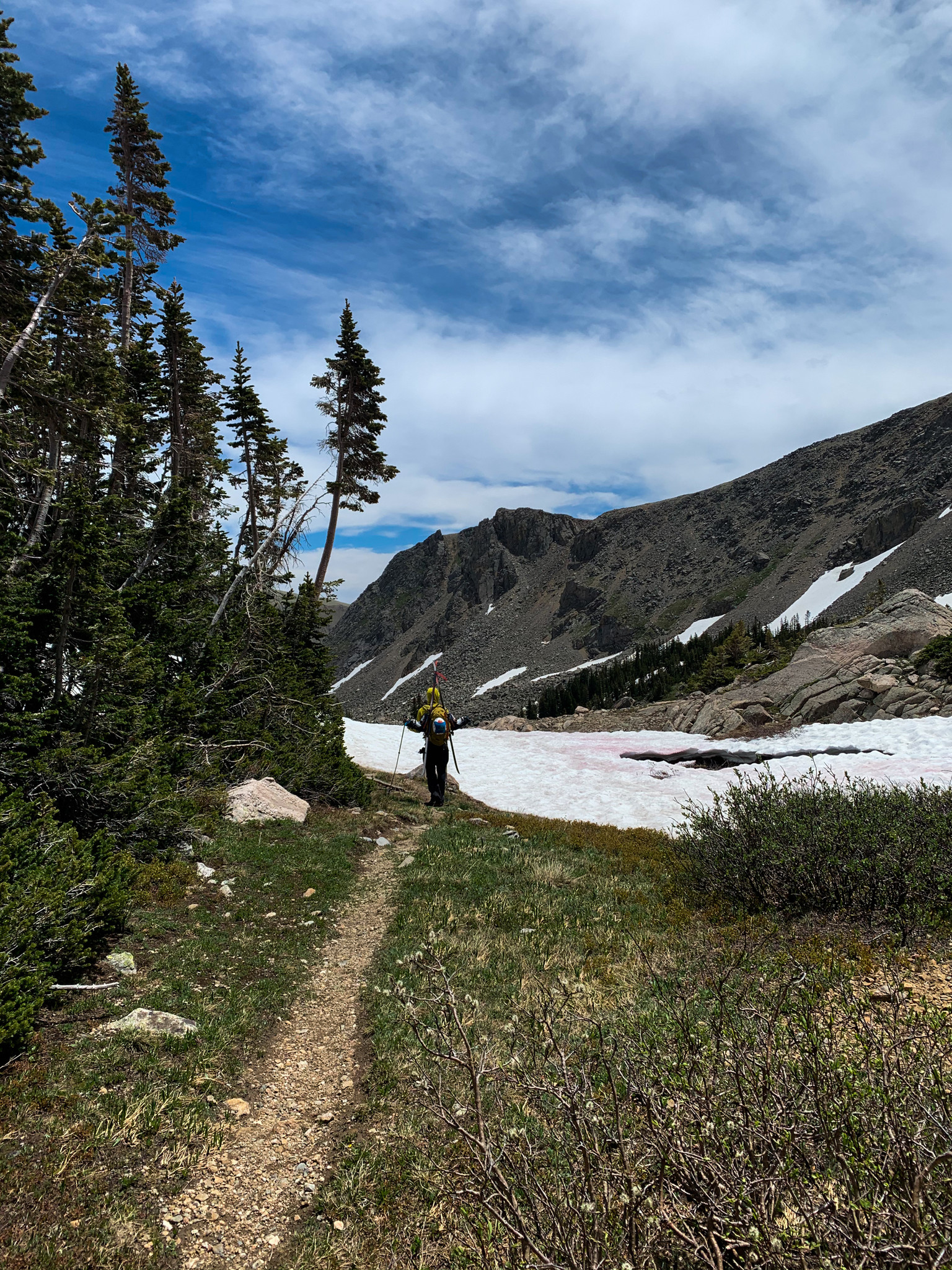 We got back to the car and made our way to the pizza - a perfect cap to a perfect day of adventuring.  Sure, we didn’t ski the line we hiked out there for, but that’s just how it goes sometimes.  Perhaps we underestimated the objective for the day, but that was also part of the adventure.  We still got a summer ski in that left all of us grinning ear to ear the whole way back to town.  It's partly about the skiing, but it’s a lot about the adventure and the company you’re with, and we got to check all of those boxes that day.

Check back later in the summer for more tips and beta on summer skiing in Colorado!