Wild Country released their new line of Zero Friend micro cams earlier this spring.  While perhaps Wild Country doesn’t roll off the lips of the American trad climber quite as quickly as Black Diamond or Totem do these days, these little Zeros should not be overlooked.  While the “zero friend[s]” moniker is hopefully mostly unrelatable to all of you wonderful climbers out there, these new little cams are sure you win you over.  Wild Country has a longer history of making cams than anyone else in the industry, not to mention a track record of quality (and happy climbers) to back that history up.

The first cam I ever bought back in the day was a Wild Country Tech Friend.  I spent countless hours in my college dorm room playing with that cam, trying to find textbook placements in the cracks between my furniture to match up with the descriptions from my copy of “Freedom of the Hills.”  I once bought an old rigid-stem Friend at a gear swap with no other intention than having that piece of climbing history sit as an ornament on my bookshelf.  For the past two years, the new Friend 2.0 cams have compromised the bulk of my rack in finger sizes and up, and I have found them a more-than-worthy successor to my Camalots.  Needless to say, I have long had a soft spot in my heart for Wild Country Friends, and I have been eagerly awaiting the release of the new Zero Friends ever since I first heard rumors of their production.

I have had the chance to take these cams out around Golden and climb on them, as well as spend plenty of time in the shop examining them and comparing them to the other small cams out there. 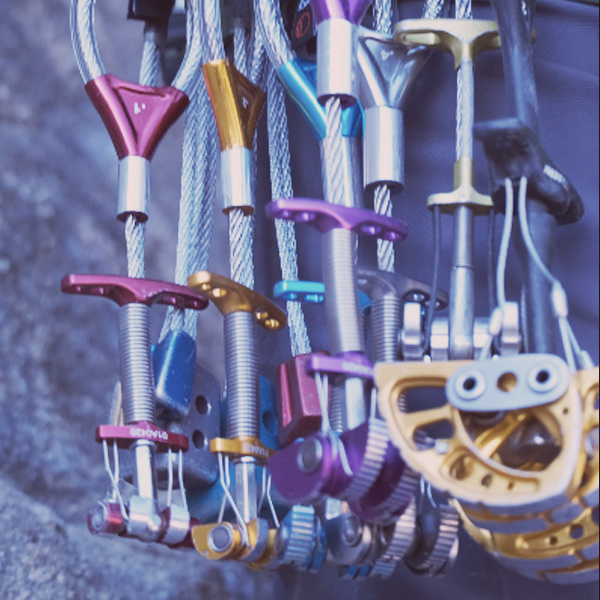 Wild Country has kept the sizing and color scheme to something that should feel fairly familiar and intuitive to many trad climbers.  The smallest Zero Friend goes down to 8.04mm.  For comparison, the Metolius Ultralight Master Cam goes down to 8.5mm, the DMM Dragonfly goes down to 7.8mm, and the Black Diamond Z4 goes down to 7.5mm.  The Zero doesn’t quite get as small as the Z4 or Dragonfly, but it is quite close, and plenty small for the vast majority of tiny cracks out there.  If you truly need the smallest of the small for your project, the smallest Dragonfly or X4 would be a nice supplement to the Zeros.

In the past, Wild Country has held strong to their 13.75° cam angle on most of their Friend offerings.  They deviate from this on the new Zeros, increasing the cam angle to 17.6°  A tighter cam angle tends to have a little less range but more bite in a placement, with a wider cam angle gives you more range but is perhaps a little more prone to walking.  The new, larger cam angle on the Zero Friends certainly helps create a greater usable range on the cams.  The Zero Friends have a greater usable range in a given size than any other single-axle micro cam.  The larger Black Diamond Z4 sizes that have the double axle do have a greater range than the Zeros, but the Zeros still have the edge in the smaller single sizes.  With how small the usable range is on micro cams compared to larger cams (such as hand-sized pieces), I find any extra range on these pieces that typically have such little margin to be a welcome benefit. 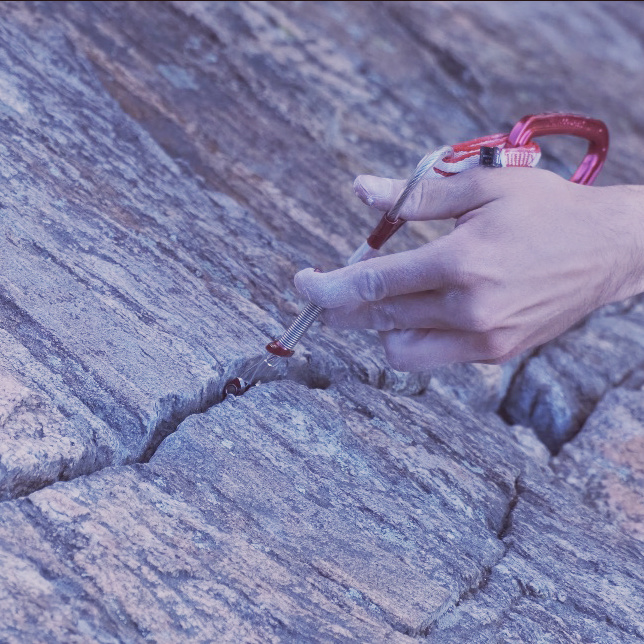 Wild Country claims the Zero is the narrowest cam head on the market.  Head width on the new Zero Friends is right in line with other recent micro cam offerings, which is to say that it is decidedly narrow.  In lining the Zeros up with other cams, the Zeros tend to be a tad narrower than Dragonflys and Mastercams, and very close in width to Z4s.  Compared to larger cams like the Friends or C4s, the Zeros are significantly narrower.  When using a microcam like the Zero, I almost never find myself wishing for an even narrower cam head to make a placement possible or better.  In busting out the calipers to measure the Zeros against the Z4s, the Zeros do tend to be approximately 1mm narrower in a given size than the Z4s, when measured from the widest points (the ends of the axle).  However, if you are measuring just the lobes (not accounting for how much the axle sticks out), the Z4s tend to be about 1-2mm narrower in a given size.

Another notable point about the new Zeros is that Wild Country is using a softer aluminum in the head than they do on their standard Friends.  The softer metal helps the cam to hold and bite into the rock better than a harder metal would.  Wild Country also is foregoing any sort of anodization or finish on the parts of the lobe that come into contact with the rock, again, done to increase the Zero’s holding power.

The trigger is encased with a metal coil that protects a soft sheath that is the actual connection between the lower and upper parts of the trigger; think of it as a burlier take on the Alien trigger design. Wild

Country’s design of the stem and trigger unit create for a very flexible cam without it having to feel floppy.  The distance between the trigger and the thumb loop is slightly greater than on most other microcams.  Another thoughtful element Wild Country incorporates into the trigger on the Zero is small cutouts that provide you a better grip and make it easier to hook your nut tool on the trigger when you are having a difficult time removing the cam from a crack.

Wildcounty sticks with the tried and true single-cable design for the stem on their cams.  While quite a few companies have been able to achieve incredibly flexible microcams over the past few years, the unfortunate tradeoff of this has often been a cam that feels floppy.  I appreciate that flexible stem as much as the next climber for helping to mitigate the cam walking or the placement being compromised, but I also hate feeling as though the cam is folding up in my hands as I pull the trigger. 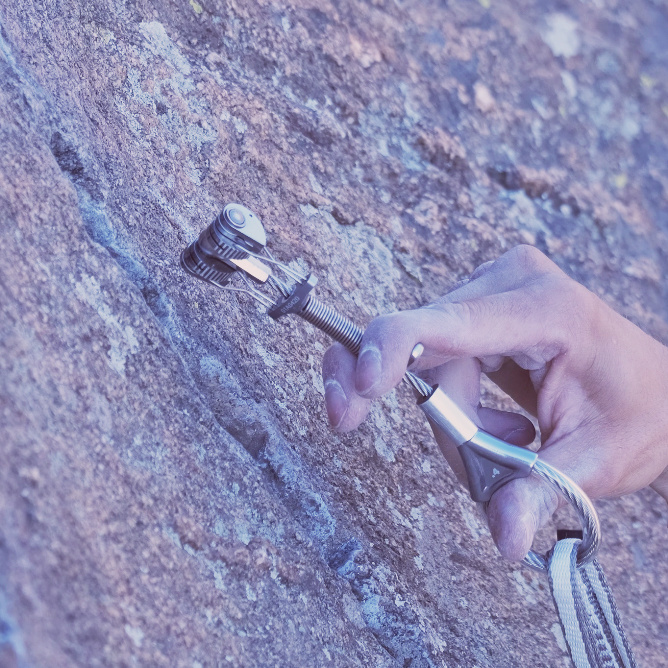 The Metolius Ultralight Mastercam (and it’s predecessor)  has been the gold standard for me over the past decade for balancing that flexibility vs. floppiness, and is a big reason why they have been my go-to small cam for many years now.  The Wild Country Zero Friends certainly give the Mastercams a run for their money in this department.  The Zeros are more uniformly flexible in all directions than the Mastercams are, while still providing above-average resistance to folding when the trigger is pulled.  They are not as stiff as the Mastercams and can potentially fold on you, but I find this happens less with the Zeros than it does with the likes of the Dragonflys or Z4s.

One downside I have run into with the stem on the new Zero Friends is that it does seem more prone to kinking than other micro cams.  While I have not experienced any of the stems doing this while placing the cams, I have found a few to kink when the cams are being removed from the rock, even when they have not been fallen on or weighted.  The two smallest sizes, the 0.1 and 0.2, seem to be the most prone to this.  Perhaps relatedly, the diameter of the cable used in the stem in these two smallest sizes is thinner (and theoretically more flexible) than in the bigger sizes.  The thinner cable, relatively flexible cable, and/or the larger distance between the trigger and the swage on the thumb loop, or some combination of the three may contribute to the kinking.  Another friend who climbed on the new Zeros had a similar experience.

Is the potential kinking a deal-breaker?  No, not in my book, though it is a mild annoyance.  If it was happening while trying to place the cams, that would be another story.  This occasional annoyance after removing the cam from the rock isn’t ideal, but it isn’t hurting the integrity of the placement or the cam itself, and it is easy enough to simply bend the stem back to straight at the next belay or back on the ground after cleaning a pitch.  And to be clear, this is not happening on every placement.  I have yet to find a “perfect” cam that doesn’t have any sort of drawback, and so far the tradeoff for a stem that happens to balance flexibility and stiffness so well with a stem that also is more prone to kinking while cleaning is one that I am willing to make.

I instantly felt at home with new Zeros from the first time I placed them on a route.  They had that same solid, confidence-inspiring bite into the rock that I have come to love and expect out of Wild Country cams.  The Zeros have an appreciably secure feel in the rock that isn’t necessarily found in all microcams these days.  The increased range on the Zeros over other microcams was noticeable, and I found myself having to spend less time fussing around trying to get the right cam and instead being able to find a variety of good placements for a given size in the Zero.

I will reiterate the great feel of the trigger - crisp and not floppy when placing, yet the stem is quite flexible once the cam has been placed.  I love the thumb loop and extendable sling combination Wild Country uses on the Zeros.  Having a thumb loop is almost universally preferred to not having one, and gives you the option to clip in short if you ever find yourself aid climbing on them.   I have found the extendable slings provide a lot of utility in extending placements. 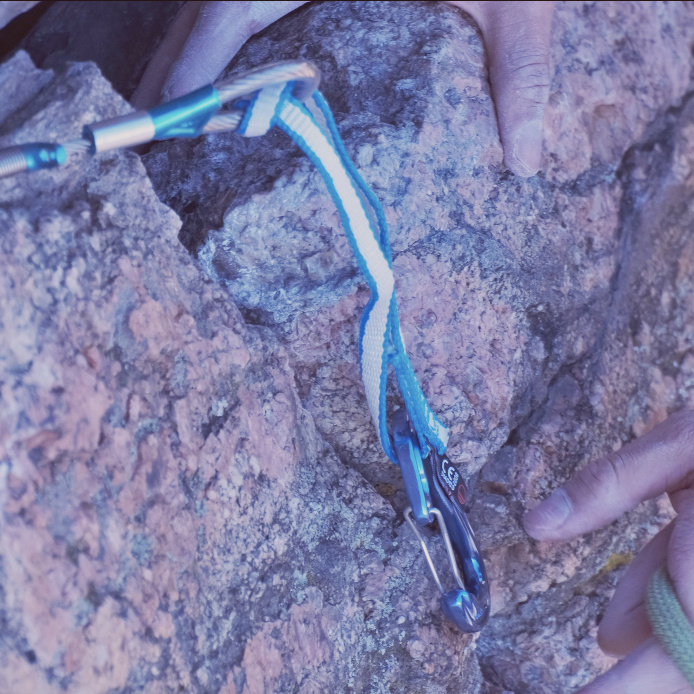 They aren’t necessarily long enough to eliminate the need to carry alpine draws with you (though they could reduce the amount of draws you need), but they work great for situations where you don’t need that full 60cm of extension.  Another plus, it is quicker to extend the cam’s sling than it is to take your alpine draw off of your harness, clip it to the cam, and still then extend the draw.  From head to sling, the Zeros just feel solid and well-thought out, from the placements they can fit into to the ergonomics of how it sits in your hand when placing them.

The Zero Friends are a bonafide new contender in the microcam race and offer a unique combination of feel and features that isn’t quite matched by anything else on the market.  The range, the bite into the rock, extendable sling, and great trigger have made the Zeros a cam I am always happy and excited to grab off my rack.  The propensity to kink when cleaning is something worth considering, but if you can live with it, you will find a cam that checks a lot of boxes for a lot of trad climbers.  The new Zero Friends place so nicely that they may just inspire enough confidence to quiet that Elvis leg down a little the next time you are trying to slam some small cams in.  If you haven’t experienced first-hand the secure, solid feel from a Wild Country cam, do yourself a favor and give the new Zeros a look.