Black Diamond’s new, highly anticipated Z4 cams came out earlier this year, much to the pleasure of many trad climbing enthusiasts.  Black Diamond is claiming that the new Z4’s combine the best of both the X4’s and C3’s of the past:  the flexibility and range of the X4’s and the stiffness and narrow heads of the C3’s.

Yes, Black Diamond is claiming these cams have flexibility and stiffness in their stems, which is something we have not seen attempted in a cam design before.  Through the design of their new RigidFlex stem, the stems are designed to stiffen up when the trigger is retracted for ease and confidence placing, but maintain maximum flexibility when the trigger is released to help mitigate walking and rope drag.  That the Z4’s have head widths competitive with the old C3’s and are being offered in a smaller size than the X4’s ever were further add to intrigue of small crack aficionados.

I have had the chance to spend a lot of time playing around with the Z4’s in the shop and comparing them to other cams on our wall and on my rack. Last week, I took them out to Clear Creek Canyon to get a feel for placing them and see how they stack up next to my trusty Mastercams and C3’s in the same placements.  In full disclosure, I have not had the chance to actually climb on these new cams yet, so take that for what it is worth to you as the reader.  That said, I believe I have a good feel for these cams at this point (aside from long term durability).  This is how they stack up.

Z4 sizing is consistent with X4 sizing; if you are comfortable using X4’s, there will not be a learning curve to adjust to new sizing.  In the larger Z4 sizing (.3 - .5), the Z4 is again consistent with C4 sizing.  It’s nice to see Black Diamond keeping their sizing consistent - so many climbers are intimately familiar with it at this point, and there is no need to reinvent the wheel here.  For those still loyal to the C3s, the sizing is different.  However, for those of us who were missing the gray 000 C3, Black Diamond has added the new size 0 to the Z4 range.  Black Diamond claims that this new 0 Z4 is the smallest cam they have ever made.  After looking at it right up against my trusty old 000 C3, I would say the sizes are nearly identical.  I did not bust out the calipers, but to the naked eye, they appear to be the same size. 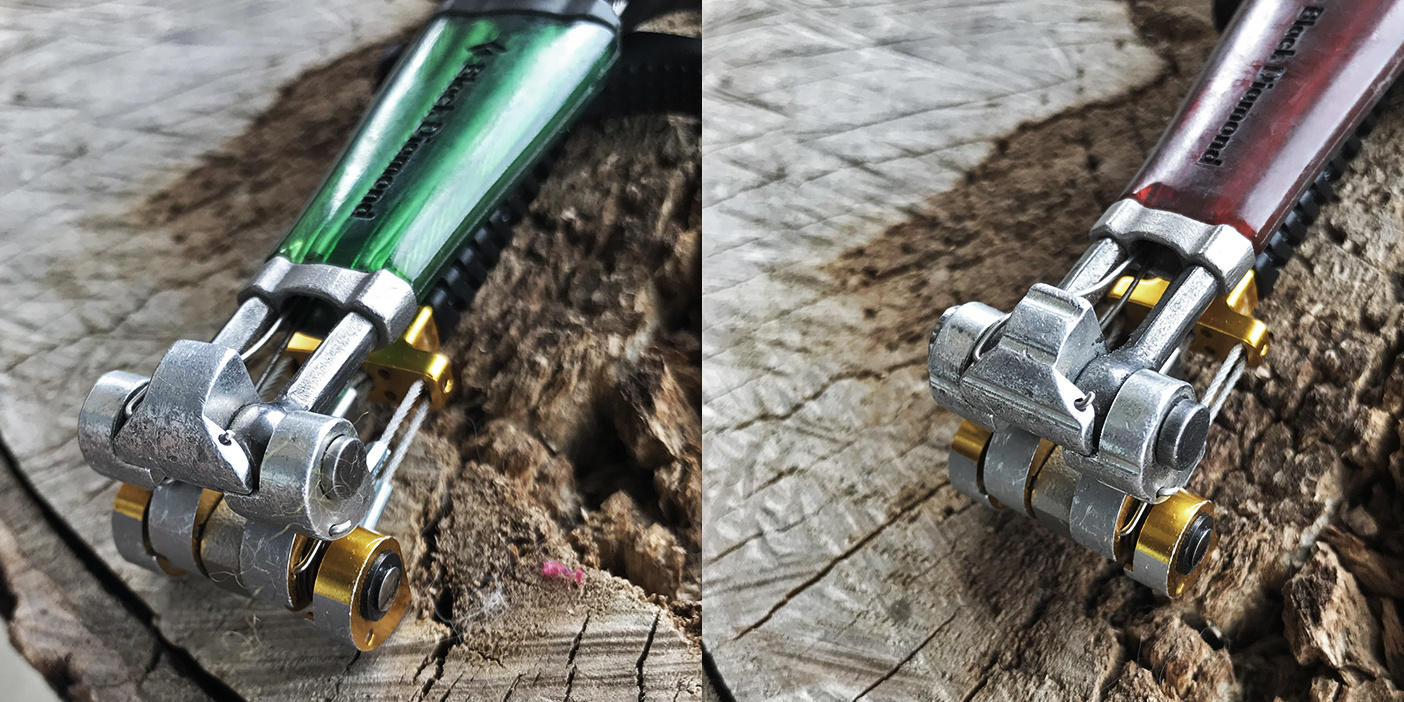 Similar to the old X4s, the larger sizes (.3 - .5) incorporate Black Diamond’s industry-changing double axle design, and a single axle in the smaller sizes (0 - .2).  A notable change here is that the new Z4 .3 gets the double axle, while it had a single axle in the X4.  I will chalk this up as a clear upgrade, and it is impressive that Black Diamond was able to fit the double axle design into such a small cam.  The double axle covers a greater range of sizes in a given cam, and with smaller cams inherently having a smaller range than their bigger brothers.  This extra range in the 0.3 size is a welcome upgrade.  The small sizes retain the tried-and-true single axle that you see across the board on all other cams in that size range. 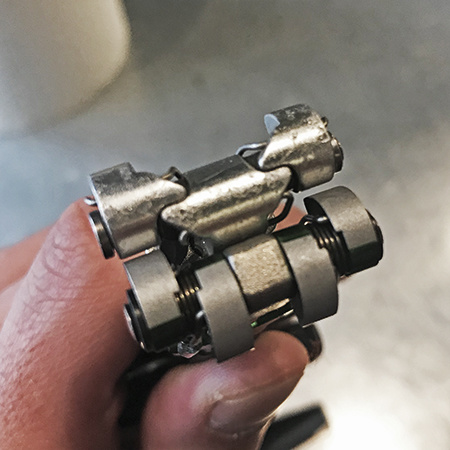 I was quite excited about Black Diamond’s claim that the Z4 head width was in line with the C3 head width.  I loved how that super-narrow C3 head could fit in placements that some of my other cams in those sizes just couldn’t.  While the Z4 head is quite narrow, it isn’t quite as narrow in most sizes as the comparable C3 (the notable exception being the 0 Z4 and 000 C3 appearing to be the same width).  Black Diamond squeezing an extra lobe into these cams should get you excited.  The difference in width is minute, and likely won’t have much of an impact on where you can and cannot place.  In placing these new Z4’s from the ground, I instantly noticed the increased stability from the four lobe design over the C3’s three lobe design.  I have always found the four lobe cams to just feel more secure and stable than their three lobe counterparts.  For many of us, the benefits of that fourth lobe are going to outweigh the small (and I mean very small) increase in head width over the C3s. Compared to the rest of the field - C4’s, Wild Country Friends, & DMM Dragons - the Z4 head is significantly smaller.  In the .3 size, the Z4 is a solid cam lobe narrower than the C4.  And in the .5, the Z4 is well over a full lobe narrower than the C4.  I find this narrower head width welcome on many placements in this fingers to tips size range, especially if you find yourself climbing in areas where you are often placing in pods. 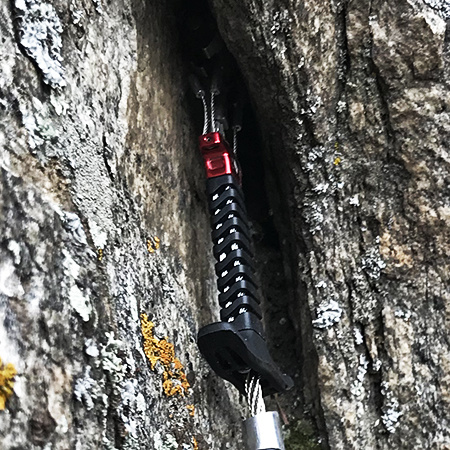 The new RigidFlex stem is one of the most interesting features of the Z4.  When I first heard about this new stem design, I was quite skeptical. I prefer cams that have relatively-stiff stems in the micro-cam world.  I don’t enjoy feeling like my cam is folding up on me when I retract the trigger.  Personally, I always found the X4’s to be too soft and too floppy-feeling for my liking.  After buying a Wild Country Tech Friend #2 back in the day to start playing with, a set of Metolius Master Cams were the first cams that I ever owned, and some iteration of Master Cam has been on my rack ever since.  I have also used C3’s over the years, finding them to be a nice complement to the Master Cams in sizing and have really enjoyed that extra-narrow head at certain times.  I tried to like the X4’s when I was using a friend’s rack (their popularity left me no shortages of such opportunities), and even purchased an X4 once in my attempt to acquire a taste for them.  The X4 and the C3 had stems that were on the far opposite ends of the stiffness spectrum, and I was quite skeptical that Black Diamond could truly bridge the gap here and have a “best of both” situation.

Upon my first trigger pulls and wiggles of the cam heads, my skepticism slowly began to ease.  The Z4’s are quite flexible when the trigger is not retracted, and you do notice the stem stiffen up when you do retract the trigger.  Does the Z4 go from X4-flexible to C3-rigid with that trigger pull?  No, absolutely not - the change is not that drastic.  I would say that the Z4 still sits closer to the X4 than it does the C3 in the stiffness/flexibility department, but Black Diamond has achieved a level of stiffness with that trigger retracted that I think I could happily rack the Z4’s on my harness.  Black Diamond has done enough on the new stem and trigger design of the Z4’s that I don’t get that dreaded “folding up” sensation with these cams in my hands.

One of the first things that stands out to me when I start playing with a new cam is how the trigger feels:  is it soft and mush, tight and crisp, overly stiff, etc.  I tend to prefer cams that fall closer to that crisper feeling.  This is very much personal preference, but something worth thinking about when you are purchasing new cams.  I always found the X4s to feel too mushy and vague for my liking.  The Z4 trigger feel is noticeably better, even if I haven’t yet grown to love it as much as my old Master Cams and C3’s  Again, where this was somewhat of a deal breaker for me on the X4, I would happily put these on my harness.

I really appreciate that Black Diamond is putting a thumb loop on these cams.  I find that, on the smaller and lighter cams, such as those in the Z4 line, having the thumb loop is less of a necessity for a feeling of security when I am handling the cam as it is in bigger and heavier sizes, it is still a fantastic feature to have and that I always appreciate.  The thumb loop is near-identical to the C4 line.  It makes me feel better when I have the cam in my hand, and it has the functionality to clip in short if you ever find yourself in Yosemite doing some aid climbing. 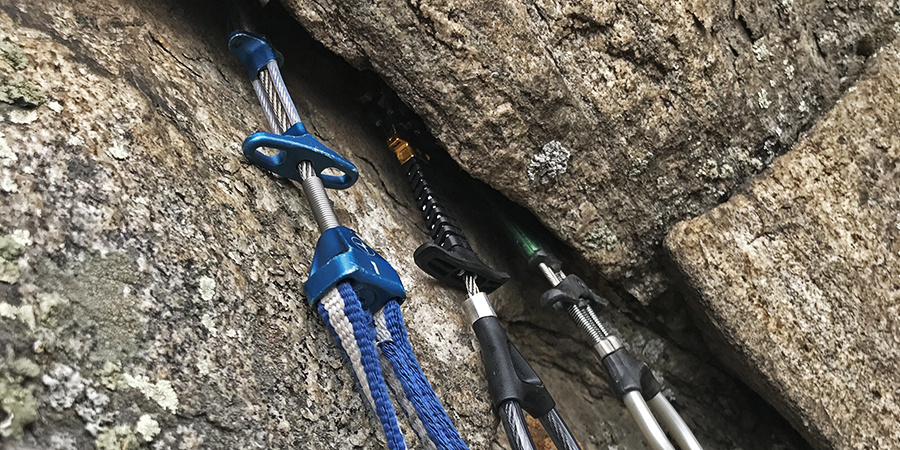 Overall, I think Black Diamond has done a fantastic job on the new Z4’s and I believe they are a clear and definite upgrade over the old X4s.  While trying to combine the best of the X4 and C3 will inherently have some compromises, Black Diamond has done a good job of incorporating a lot of the things that climbers loved about both cams into one.  The Z4 should have a broad range of appeal to trad climbers and is worth a look if you are interested in upgrading your small cam game!

Check out the new Z4's here!